The scream of anguish rang throughout the mansion, and Spike was across the room before he’d even realized he’d reacted.

He skidded to a stop in front of Xander, who was staring at his computer screen in absolute horror.  Okay….

He glanced at the screen, huffing in resignation.  Facecrack again. Vampires shouldn't do the whole social networking thing, should they? How undignified. Unless one was trolling for potential victims of course,  but being Souled took all the fun out of potential nefarious plans for procuring victims, it did. But what was up with Xander?

Xander let out a moan, burying his now face in his hands.

“It can’t be. Itjustcan’tbe..” Xander’s muttering was muffled.

Alarmed, Spike spun Xander’s chair so that Xander was facing him. He pried the cold hands from Xander’s face, noting that the young Vamp had gone into game-face. Must be serious, then. Buffy? Angel? Willow?

“Pet, tell me what’s wrong. Who’s in trouble?” Spike’s anxiety shot up about a dozen notches. They were supposed to be taking a vacation from the White Hat Follies—that’s why they were hanging out here in the relative peace and safety of Angel’s old mansion.

Xander turned golden eyes glittering with tears upon his Sire. ““I am sooo  going to dust, Spike.”

This didn’t make any sense.  Spike, despairing of getting any useful information from Xander, peered again at the computer screen.

Yep. Facecrack. His eyes narrowed as a meme caught his eye.

Spike scanned the post beneath the meme. “Twinkies Maker Will Close After Strike.”

Xander pulled away, looking up at Spike with a wary, hopeful expression.

Spike stood, pulling Xander along with him. “Come with me.”

Spike led his lover to the huge underground garage.

“What do you think he sent me?” Xander asked.

Spike smirked. “Dunno. He said it was critical that you got it. Some shite about it being necessary for the well-being of the latest Aurelian.” He flicked on the overhead lights. There, against the wall was a mountain of large boxes; stacked five deep, ten high. Each one read, “Hostess Brands Inc.” on the side.

Xander’s eyes grew big. Very big. Before Spike could speak, the young Vampire was bounding over to the boxes, quickly grabbing the closest one to open it reverently. He pulled out a armload of … yep, Twinkies.

Spike chuckled to himself. Had to hand it Peaches, his intel was effective, and he could be downright thoughtful when he wanted to be.

He left the garage, still chuckling. Only a Vampire like Xander... 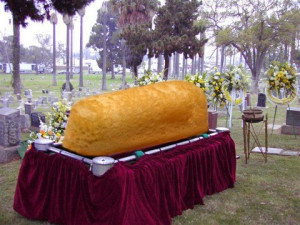 Author's note: You’ll have to forgive me, but I had an acute attack of severe goofiness this afternoon.